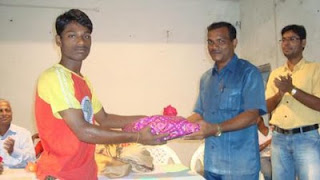 He was represented Pune Division in the Division level competition and became winner.  In the next state level competition held at Panwel, dist. Raigad on 26th, October 2009 his team was lost the game in semi-final, but Amol was selected for National Tournament held at Raipur in Chhattisgarh state during 5th to 8th, October 2009.  He is going to participate in the training and pre-competition matches at Buldhana during 1st, October to 4th, October 2009. Amol is the the the first student to Bhausaheb Firodiya High School who reached the National level ever.

Prof. Chaudhari and Prof. Shete coached him for the success.