The Chikhali village in Shrigonde tehsil has been declared free from Female infanticide after the " Save the Girl child Mission " initiated by Snehankur Adoption centre.
This Well irrigated and prosperous Shrigonde Tehsil has a bad reputation for increasing female infanticide. The girl to boy ratio has declined to 780 females against 1000 males despite the efforts by the government.

Our Snehankur team (Mrs.Prajakta Kulkarni, Mrs.Sarika Temghare, Mr. Ajay Wable ,Dr.Suhas Ghule)  designed a program to promote 'Female infanticide Free Villege ' and save the girl child. We launched this program in Chikhali villege located in Shrigonde tehsil of Ahmednagar district on 25 th Feb 2011.  We involved the Gram Panchayat and organised a day long programme in the village.

Through Film shows, slide presentations, talk shows and dialogues,  our team sensitised the audience about female infanticide and the huge social problems associated with it. We also brought it to their notice that laws-police and the Government have limitations in solving this issue and hence their complete support is required for the cause.
A pocket size literature was distributed to each villager. They were appealed to not kill a girlchild and were educated about 'organised social interventions ' in the such cases. In case of unavoidable circumstances, people can legally handover/relinquish  the girl child to Snehankur Adoption Centre instead of going through illegal abortions and killings.
On this note, Snehankur team shared a data of rehabilitated girl children  and rehabilitated unwed mothers till date.

We received a very positive response from the villagers. They have taken a joint pledge to act unitedly on the issue and in keeping the villege free from female infanticide.
There are 1570 gram panchayats in Nagar district. Our Snehankur team is planning a 3 days training programme in month of May with the support of interested youth volunteers in these14 tehsils.
These volunteers will attend the Gram Sabhas of the villages in their tehsil and sensitise the grass roots about the social problems associated with female infanticide.

Our New Ambulance to the rescue of a girl child

Snehankur adoption centre frequently receives calls for rescue of children in danger. In the remote parts our district and at odd times, medical facilites are hard to find. For the last eight years, this team which had only an old vehicle for rescue, and always wanted an ambulance.

For lack of funds, we were not able to provide this facility for the team - till two days ago. We purchased an Ambulance on 'credit', and were hoping to inaugurate it over the weekend.

Last night, at 11.30 PM, Snehankur got an anonymous call from Shirdi, 85 km away. The caller informed  about an abandoned girl child. It takes 2 hours to reach the place. Our local volunteers at  picked up the child from outskirts of Shirdi. The girl child was facing suffocation and many other .
The Snehankur team reached the spot at 1.30 am. The child urgently needed oxygen. Fortunately this was   available in our ambulance. The life of a girl  child was saved by our new ambulance

The girl child has been named 'Sohini' and the the Child Welfare committee ordered to admit Sohini to Snehankur centre.

We still need to repay the loan we took to purchase the ambulance. But Sohini's improved health, thanks to the effort of Dr. Jaydeep Deshmukh our pediatrician, has given a great boost to the team at Snehankur.
Posted by Snehalaya at 5:53 AM No comments:

Most prospective adoptive parents want to adopt an infant. We at Snehankur often wonder why many educated parents waiting for adoption do not accept elderly kids. Why is there such a lack of trust and confidence? We have learnt that many parents are afraid of non acceptance and rigidity of elder children. We know that this fear is unfounded and imaginary. Children can and will accept the family very easily. It is upto the adults to trust and accept these children. They have been waiting for parents and a family for years and will happily embrace you.


While it is a routine activity for the team in Snehankur to handover children to prospective adoptive parents, yesterday was a very satisfying experience. Three families, by their own choice, happily accepted children of age 6 years and above, on the same day.


Mrs.Anuradha and Mr.Uttam Suryanshi, though young enough to adopt an infant decided to take an elderly kid in adoption. They had full confidence that, intellectually and emotionally, their child was fit. They added "We have no moral right to deny an elderly kid when he eagerly accepts us as his parents. It would be our weakness if we did not trust this child ". Mrs.Saumya and Mr. Anandteerth Kagwade told that their child was strong and shared his tragic past experiences. He was tough and at the same time loving. They saw in him affection and gratitude which moved their hearts. They felt the same towards their son. He called them Mummy and Pappa from the first meeting. Another family accepted an elderly child who was having a medical problem which could be cured in a few years. The child was distressed when they first met them and asked them innocently if they really want to take him as their child. He said his medical problem seemed like a punishment for no fault of his. "We looked at each other and with tears we hugged our child," the couple told us.


None of the three families are over aged or poor .They may get an infant within few years. But they trusted the children to complete their family today, than wait indefinitely.


The number of abandoned infants has drastically reduced in the last 6 months. Pregnancy prevention pills and  abortion pills are helping to eliminate the issues of unwed mother. While that is a good news, what about the patents waiting for adoption? Now most children available for adoption are between age group of 6 to 12 yrs and we have very few infants. The elderly children lost their parents in unfortunate circumstances. But prospective adoptive parents are hesitating to trust them .We request you, from bottom of our hearts, to leave your prejudices and suspicion. Trust the elderly children. They will surely trust you. .
Posted by Snehalaya at 9:10 PM 32 comments:

Feb 7th, 2011 Ahmednagar:
Four children were found working under a contractor on railway tracks. Upon receiving the information, Snehalaya childline team immediately swung into action and took the police help to rescue them. 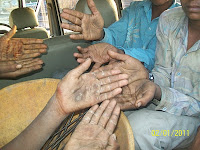 The district labor officer Jairam Mitke did not take notice of complaints by Snehalaya against the contractor. He did not cooperate with the police to bring the guilty to justice.  It was unfortunate that the official whose primary responsibility was to protect children from exploitation was acting in the interest of influential contractors. He supported the contractor Suresh Mesu Damor and his supervisor Pankaj Patil who were using the children for railway track work, by not filing a case despite several complaints.

Snehalaya childline team did not give up and escalated the matter to District collector.  The collector not only ensured that the case was filed, but also promised to take severe action against Jairam Mitke, for negligence of duty. The collector agreed that child labor is a grave problem in the country and praised the efforts of Snehalaya team in this rescue and pursuing the complaint against the erring officials.  Local newspapers covered the issues and brought to issue to public notice.
Posted by Snehalaya at 6:48 PM No comments: