New Delhi - April 4th, 2011
People from all walks or life supported Loknayak Padmabhusan Anna Hajare’s movement to pass the Jan Lok Pal Bill in New Delhi.
The representatives of the prostitutes from Ahmednagar district joined Anna Hazare at Jantar Mantar to support his movement against corruption. 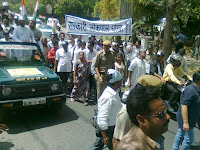 
These representatives of prostitutes participated in the rally from India gate and concluded at Jantar Mantar.

The local leader of Sainathnagar was running a brothel on the land that belongs to Zilha Parishad (Govt. land) for the last  25 years. 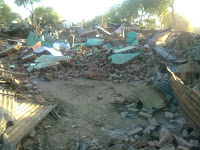 When the opposition party raised the issue in the assembly, Kopargaon Municipal council abruptly destroyed 150 huts at the Sainath Nagar red light area.


Around 250 women sex workers became homeless overnight and they lost every small thing they had possessed. The Municipal Council did even deem it necessary to give any pre-intimation about the Action.


It is a mockery of government machinery that allows illegal constructions of land barons and political bigwigs go unnoticed, but the small huts of poor victim women are demolished without providing a notice, let alone alternative place to stay. This when they have been exploited for years by the politicians themselves.


The representatives of the women discussed the issue with the District Collector, Dr. P. Anbalagan. He was requested to provide the other options for living e.g. vocational training, microfinance to Self Help Groups etc.   Smt. Meenatai Shinde demanded the housing scheme for prostitutes. The collector has given some assurance to take positive action.
Posted by Snehalaya at 10:27 PM No comments:

Mr. Satish Kane, the editor of Daily Samachar and one of the trustees of Snehalaya was recently awarded  with the Vasantrao Deshmukh Award for path-breaking Journalism, by Shreerampur Municipal Corporation.


Mr. Kane donated the whole award amount of Rs 25,000 plus Rs.10,000 to Snehalaya.  Mr. Yashwant Kurapatti accepted the donation on this occasion.  Mr. Kane has helped spread the word about the work of Snehalaya for the last layer of the society, in several of his articles. During the occasion, he appealed to the journalist fraternity to raise the issues related to the common man - because he said 'they have no voice, otherwise'.


He appreciated and thanked the donors, well-wishers and supporters of Snehalaya in Shrirampur for their contribution.


Posted by Snehalaya at 9:28 PM No comments:


Anna Hazare is Snehalaya's first life member, ex. trustee and continued inspiration to all of us.

On March 31st, we organized a public meeting of Anna at Neel Kranti square in Ahmednagar where more than 12 thousand people were present.  We then took up  25 Chowk Sabhas (square meetings ) in the city to invite people for this meeting where we handed out 20,000 hand bills to support Anna in his fight against corruption.


Annaji also addressed live on our Radio Station, Radio Nagar 90.4 F M for 1 hour on Lokpal Bill and his Satyagraha.


Snehalaya's trustees Meena Shinde, Hasina Shaikh and volunteers Sunita Unawane, Sangita Shelar,Yashwant Kurapati, Pravin Mutyal and 15 others are with Annaji in Delhi travelling with him from Rajghat to Shahid Jawan Jyoti and to Jantar Mantar. Not only the common people, but even sex workers, men and women from the lowest strata of the society in  Ahmednagar are participating in his fasting.

Snehalaya is undertaking many more programmes at city and district level in Ahmednagar and will continue to fight alongside our leader.