26th Jan. Ahmednagar-
"Snehalaya is the inspirational, path-finding place in India, I have ever seen." said by great legendary actor Aamir Khan at the opening ceremony SATYAMEV JAYATE BHAVAN in Snehalaya. He spent his whole day & celebrated Republic Day with kids, girls, women & workers of Snehalaya from his busy film schedule. He was really touched to receive so much of love from kids at the Bhawan.

"We can’t just rely on government for any positive changes. We need to change our mindset," he added while addressing the media.
Snehalaya has got a new residential and training facility for destitute women through Aamir Khan's television show Satyamev Jayate. Aamir Khan had highlighted various social issues on the television show Satyamev Jayate. At the end of every episode Aamir used to appeal people to donate for an NGO to support their cause.  Help flowed in from all over the country for Snehalaya after Aamir's appeal. Donation of Rs 3.26 crore was received through the show. 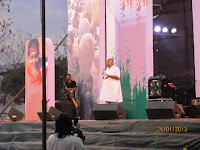 “With an intention to put this money for the cause of women, Snehalaya constructed a building spread over an area of 19,000 sq ft. "The Bhawan is meant for rape victims, abandoned girl children and other helpless women. This centre will provide women with food and shelter and eventually rehabilitate them. At the opening of the Bhawan in Ahmednagar, Aamir also launched a SJ DVD and witnessed a live performance by music composer, Ram Sampath and singer Sona Mahapatra. Director Satyajeet & Swati Bhatkar, Lyric Swanand Kirkire.  Mr. Suchit Nanda from Reliance foundation, Mr. Bhargav from Letz Dream & thousands of well-wishers, donors & volunteers of Snehalaya were present at the function. The team of Snehalaya took extra hard effort for the successful organization of the biggest event ever in the history of Snehalaya. 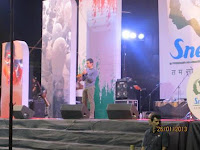 Snehalaya pledges & appeals to celebrate every year, May 6th as 'Satyamev Jayate Din' to commemorate the launch of Satyamev Jayate television show that has inspired millions to fight against female feticide. 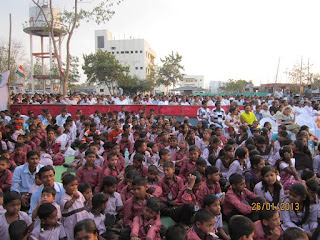 HELP FLOWED IN FOR SNEHALAYA
- Snehalaya has been working for the rescue and rehabilitation of women and children in distress, since 1989. It has been instrumental in curbing flesh trade in Ahmednagar.
- In the very first episode of Satyamev Jayate on May 6, 2012, Aamir Khan had appealed to the viewers to donate for Snehalaya. Help flowed in from all over the country.
- Snehalaya has got a new residential and training facility and named it Satyamev Jayate Bhavan.
Posted by Snehalaya at 3:33 AM 1 comment: 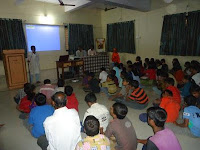 On 12th January, Snehalaya Rehabilitation Center celebrated 150th  Swami Vivekanand Jayanti in project premises.  Prof. Krushna Patil, History Dept. - Pemraj Sarada College, was the chief guest of this program. He has given very much good information about Swamiji’s life and philosophy with slideshow presentation. Also he told motivational stories.  100 children had attended this program.
Posted by Snehalaya at 1:24 AM 1 comment:

Radio Nagar’s Assurance for Strengthening the Voice of Citizens

Ahmednagar’s contribution to Maharashtra’s social, cultural and educational development has always been significant. Radio Nagar has committed to instill, encourage, and promote social pride in the citizens of Ahmednagar and to leverage it for the development of the city.

The 2nd foundation day of Radio Nagar 90.4, operated by Snehalaya, was commemorated on 13th January, 2013. Radio Nagar has always reviewed and highlighted the social problems, key developments in the city and the concerns of the citizens. Luminaries from various backgrounds such as social, education,  and political, have also expressed their views on this channel from time to time.
Radio Nagar - The Pride of Marathi Community.

To commemorate the foundation day, a social gathering was organized in the Dr Shankar Keshav Adkar Open Auditorium. Many luminaries dedicated to literature, politics, social and cultural arenas ensured their presence for the same. Palak Mantri Mr. Baban Rao Pachpute made it a point to grace the occasion with his presence in spite of the ongoing Khashaba Jadhav wrestling competition, and also gave a wonderful interview to the Radio Nagar team. Canada-based well-known Marathi writer Dr. Vidyullekha Aklujkar mentioned that Radio Nagar, which strives to bring together social enlightenment with entertainment continuously over 18 hours, is the pride of the Marathi-speaking community in Nagar. On the occasion, Mayor Sheela Shinde, Deputy Mayor Geetanjali Kale, Ex-Mayor Sangram Japtap, Ex Nagaradhyaksha Mr. Shankar Rao Ghule, also many luminaries from the field of literature such as Dr Sanjay Kalamkar, Keshav Bhanage, Sunil Raut, Mr. Bhalchandra Balate, Dr. Mukund Devalalikar and many respected writers and poets were present.