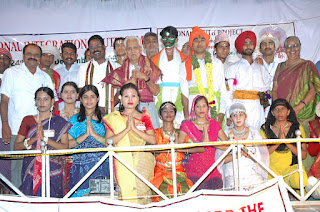 Dear friends,
Mahatma Gandhi still lives through the lives of many dedicated soldiers of peace, such as, one of the most popular and dynamic youth leaders, Dr. S. N. Subbarao, a fellow of Gandhi Peace Foundation and founder of National Youth Project. He inspires and lifts up the spirit of youth for building a new society based on Love, Peace, Harmony and Social Justice. You must be aware of his constructive work at the grassroots level. At the age of 83 Dr. Subbarao works with zeal that could be enviable to youths.
National Youth Project & Snehalaya are jointly organizing a National Youth Integration Camp to be held at historical place Fort of Ahmednagar, Maharashtra from 25th  Feb. to 2nd  Mar. 2012 in the great leadership of Dr. S. N. Subbarao . Around 500 youths from all over the country will participate in the camp. To extend the message of National Integration, To inculcate the importance of bread labour and collective discipline in the youths are key objectives of this camp.
This camp has been organized at historical Fort of Ahmednager which was built by Malik Shah Ahmed (after whom the city of Ahmednagar is named) in 1427 CE. After Second Anglo-Maratha War in 1803, The Fort was used by the British Raj as a prison and this was where Jawaharlal Nehru, Abul Kalam Azad, Sardar Patel and other National leaders were jailed for almost three years after they passed the Quit India Resolution.
India's first Prime Minister Jawaharlal Nehru had written world famous book 'Discovery Of India' in this fort. This fort is almost in ruins now. It needs to be renovated not only for attracting the tourists but also for inspiring the youths of India. Youth from
all corners of India  wish to contribute to the renovation by doing Shramadan in the fort.
The organized camp doesn't get any grant from the government. Like-minded friends, organizations, social workers have to come together to bear the expenses of the camp. May we request you to extend your generous help for this cause of great national importance? You can support us by following ways….
1. Kindly send your cheque or DD in favor of  NATIONAL YOUTH PROJECT, Ahmednagar Unit on following address:
C/O Snehalay Bhavan, Opp. Chitra Theater, Near Gandhi Maidan, Ahmednagar-414001 (M.S.) India.
2. You can give us your valuable time, skill by working as a volunteer also.
For more details call on 9011026474 / 9850128678 .

Posted by Snehalaya at 1:37 AM No comments:

Snehalaya's Vidyarthi Sahayak Samiti (VSS) received a grand response to its series of lectures at Shrigonde, a town about 60  kms away from Ahmednagar.  More than 800 youths had attended these lectures. Many of them have shown interest in the work of VSS and joined hands.


Snehalaya  runs a Vidyarthi Sahayak Samiti in association of Mahamanav Baba Amte Sansthat Shrigonde town  for 20 students from poor families. Anant Zende, our volunteer, stays there and looks after the activities.


Mumbai-based Mr.Girish Nilkanth and Mrs.Sarika Girish Kulkarni have donated their old-styled big house ( Kulkarni Wada) in Shrigonde to Snehalaya for the cause.

Shrigonde is a tehsil place and growing day by day with 3 senior, 6 junior colleges and technical-vocational trade activities, but lacking behind in cultural and social activities.  Hence, VSS orgnised the event and decided to continue it for reaching to masses to get human and other resources.


Anil Gawade spoke on Child Rights and the role of Civil Society. Adv. Shyam Asawa delivered a lecture on Need of Jan Lokpal Bill and Anna's Movement.  Prof.Kadam spoke on simple methods of Meditation and Yoga with experiments, while Dr.Girish Kulkarni spoke on' Experiments of Social Change, quoting the details of the work of Parivar Kendra, SHM (Kolkata), BNGVN, Hivare Bazar, MAHAN, Helpers of handicapped, etc.

The series will be concluded on 5th January with a lecture by Hon. Krishna Prakash, District Police Chief on 'Role of Police, Civil society and Media in curbing Crime.'
Such activities give us new volunteers, the experience of organising the small events, inspiring our own residents/students ,encouraging our future donors and boosting  volunteers - supporters at the local level.  VSS found sponsors for everything and organised the programme on zero budget.  Credit goes to Anant Zende, and his 'TEAM VSS' runs with NO EMPLOYEES.


Anant Zende is working as a peon in a private school.  He spent his past earnings in renovation of the Kulkarni Wada for VSS.  Presently he looks after VSS  voluntarily. Students are preparing their food in rotation.The committment of giving 1 day of the week for society is the only condition Anant has kept for students in VSS.  Mr.Ramakant Tamboli, senior trustee (76 yrs.)  of Snehalaya gives daily guidence to Anant and VSS at Shrigonde. Mr.Tamboli worked with Late Achutrao Apte, founder of V.S.S., Pune  more than 29 yrs.
Posted by Snehalaya at 6:51 AM 1 comment: