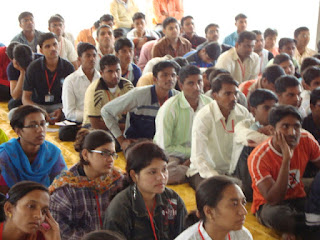 The “National Youth Integration Camp" organized by National Youth Project and Snehalaya will be inaugurated tomorrow on 25th Feb. 2012. The 25 campers from north-east states, 38 from U.P. Kerala- Karnataka, 60 from various districts of Maharashtra, have already reached last evening and about 400 are reaching today and tomorrow. Equal number of selected youths are participating in the youth camp from Ahmednagar district and rest of Maharashtra. The venue of the camp is "Swami Vivekanand Prerana Nagari " set up at Bhingar (suburban and cantonment of Ahmednagar)

Annaji's Guidance
The day before yesterday, all the organizing committee members and volunteers had  a long  dialogue with Anna Hajare at his  Ralegansiddhi village.  Anna has proposed this Youth Camp at Ahmednagar in June 2011. Anna said that, ‘There is an urgent  need of motivating youths in the country  for addressing directly the issues of primary education, health, rural development ,vocational skills and soft skills,  etc.  No change is possible just by blaming the government system. The differences on the  basis of caste-religion-region-language-sex-political parties are weakening our national power. Anna further told that the constructive work is the basis of all types of fights against the corruption, injustice and discrimination. Youth camp will definitely give the right -rational  direction of constructive work to Youths.

Anna also assured to share maximum possible time in the camp upon his return from Delhi on 25th  Feb and invited all campers to Ralegan Siddhi on 29th  Feb. 2012.
Bhaijee's Letter to Defense Minister
Founder of National Youth Project and freedom fighter Dr. S .N. Subbarao allies Bhaijee yesterday  took a press conference along with Mr. Krishna Prakash (district police chief) and Dr. Sanjeev Kumar (D.M.). The local press club felicitated the 'Cheerful-optimistic Young Man' of just 85 years. Bhaijee had briefed about the history of National Youth Programme (NYP), present situations in the country, need of character building and motivating youths for nation building, and need to remember the philosophy of freedom struggle.

Bhaijee justified the venue of the camp by saying 'Bhingar is the birth place of Anna Hajare and all our national leaders in freedom struggle were imprisoned in Ahmednagar fort for 3 years (1942 to 1945).' The camp venue is just in front of the fort. All Youths wants to take a Oath inside  the fort in the premises of then jail barracks. But since the Army has denied the permission for Oath ceremony inside the fort, the premises close to fort has been obtained by organizers for camp.  In the press conference, Bhaijee condemned the military authorities for not respecting the patriotic sense behind the proposal in the press confrence. Bhaijee has shown a letter send by him on 22/2/2012 to Mr. A .K. Antony, defense minister of India requesting the reason behind this negative attitude.

Dialogues and public shows
Bhaijee and Krishna Prakash briefed about the detailed program of the camp. The campers will be full time busy from morning 5 AM to night 10 PM. The day will start with Yuva gan-Yoga-shrama Dan-Bhasha Varga. Every evening, the programmes  of peace march-Sarva dharma Prarthana-cultural programme 'Bharat ki Santan 'have been arranged at different locations. The Organizers have selected the communally sensitive places like Jamkhed-Sangamner-Newase -Ahmednagar  for evening programmes. These places have experienced the worst communal riots in recent days. Our initiatives will bring the 2 communities closer. This will give an experience of direct intervention in a social issue to campers. Mr. Hajare will inaugurate the camp at 4 PM tomorrow after a Peace March. Mr. Pravin and Priti Patkar will talk to youths at 1 PM on 27th Feb. Architect of Hivare Bazar Rural Development Project Mr. Popatrao Pawar, Anna Hajare and Rajdeep Sardesai will talk with campers on 29th  Feb. Mr. Srikanth Belwadi (Product Manager of Google, Executive Committee  Member of Snehalaya and Caring Friends Network) will talk to youths about the  use of technology / I.T. skills for the NGOs and  social change  on 1st  March.  Mr. Ajit Thadani (founder of Retailware Software Company and social activist, Pune) will accompany and help  Mr. Belwadi.  On 2nd  March, Mr.Krishna Prakash , a dynamic and honest IPS will speak how even a single person in the system can bring a change.  Dr. Sanjay Malpani (Founder of Geeta Pariwar Movement) will preside the event. Campers  will get the chance to interact with each other, to know the social and other issues from other parts of the country in a 'Youth Talk' session. Anyone can join this camp even if he is senior in age. Because for us 'Youth is who keeps a mental and physical energy and will of change.' 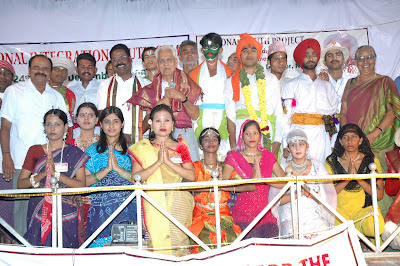 Posted by Snehalaya at 1:35 AM No comments: 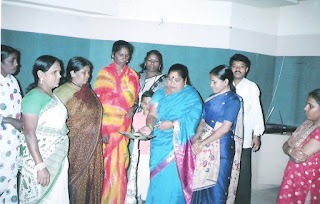 Snehalya’s social worker Gitabai Vitthal More had died earlier. She was 45 years. She had two daughters, one son-in-law and three grandchildren.

Gitabai had give much important support in 1989 for foundation of Snehalaya. She not only worked as a lifelong member  but also  organizer of Snehalaya. She had dedicatedly   worked for prostitute women, rehabilitation, as well as help to solve their problems.  In natural disasters  like earthquake , tsunami, and drought she rendered one day's income of prostitute women at Ahmednagar district to distressed. In 2006 she was chief guest of HIV/AIDS week organized in Nagar city. She always participated in  national “ Bhrashtachar Virodhi Janandolan.”

Her work will always inspire Snehalaya.
Posted by Snehalaya at 10:27 PM 1 comment: 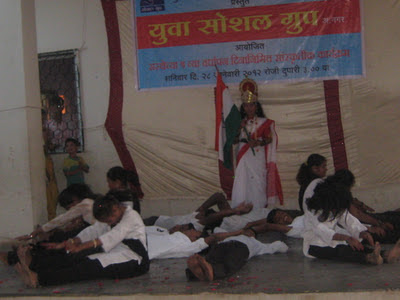 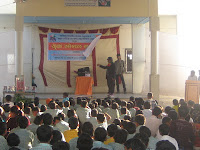 YUVA SOCIAL GROUP, Ahmednagar, celebrated the 5th Anniversary with Snehalaya’s children. It was pretty enjoyable for children and more than 450 children participated on this occasion of the day of Rehabilitation Center and Balbhavan Project. Also, children performed in the programme. The main objective behind this programme was to encourage the children and to inspire focus toward the good things...And last but not least, to see the smile on their cute faces. The programme contained a magic show by Magician Dhananjay  Vadipakke, and cultural activity by Snehalaya’s children. Yuva Utsav  end with Award distribution to the students.
Posted by Snehalaya at 4:40 AM No comments: