Snehalaya organizes 'Get together with a purpose' for network of NGOs. (Nov 2009)

Financial prosperity, power, authority or fame cannot make human life meaningful.  But it is possible only if we extend our every possible support to under privileged countrymen & women. Considering them as images of god, appealed Rameshji Kacholiya, founder of Mumbai Group of Friends (MGOF) here. He also appealed all the likeminded civil society members to join Snehalaya as Snehalaya is changing the destinies of hundreds of most deprived sections of our society. 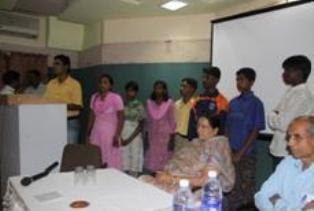 Snehalaya has organized a Get-together with Purpose on inspiration of MGOF on 25th Oct 2009 in auditorium of Hotel Yash Palace at Ahmednagar. SMT. Chaya Firodiya, belonging to Kinetic Group of Industries and secretary of Ahmednagar Education Society has presided the meet. Mr. Kacholiya was present as Chief Guest at the function.  Rameshji addressed to present   285 well-wishers and donors quoting his inspiring experiences and observations of various humanitarian works, MGOF in associated with. Mr. Kaushikbhai Shah, Mrs. Sudhaben Shah, Dr.Sarojben Mitra, Ms. Miranda Hudson (Volunteer from U.K), Mr. Bhagwan Fulsaunder, (First Mayor of the city) and many others were present at the function. The eminent personalities from banking, Industries, media, social and political field, Govt. officers and Lawyers and Judges were present at the occasion.

Mr. Kacholiya said that even our smallest help has a potential to change a destiny of under privileged children. Snehalaya has stopped use of minors in the red-light areas of Ahmednagar District and eliminated the second-generation prostitution by providing them proper education. Snehalaya has done pathfinding work in the rehabilitation and social reintegration of the HIV positive kids and women and the rescued victims from the brothels. Since last 7 years, Snehalaya has also developed its projects in various 5 slums. Snehalaya has created role models and road maps of social change. Institution has made it possible only with the support of volunteers, and donations from individuals and private trusts. Mr. Kacholiya further appealed to personally visit all the projects of Snehalaya to understand the change brought by Snehalaya.

Mr. Kacholiya also told about some of the institutions getting support of MGOF. The NGO’s with true volunteerism  are going to  carve the future of India and relying merely or blaming to Government, Police, Judicial, or media for not bringing  the social change will be escapism for civil society, he commented.
Mr. Ambadas Chauhan (Asst. Director) introduced some of the success stories of Snehalaya. Snehalaya’s students are toppers in some of the well-known schools of Ahmednagar. Mr. Milind Kulkarni (Secretary), explained about the plans of Snehalaya. Hon. Director Dr. Girish Kulkarni told about the challenges and the expected role of civil society in various issues. Miss. Miranda Hudson said that the poverty and exploitation anywhere in the world would always be a threat to peace and prosperity anywhere. The work in slums, red-light areas and shelter home of Snehalaya gives a true satisfaction of living a meaningful life, she said. Mr. Sanjay Bandishti offered the vote of thanks.
Posted by Snehalaya at 12:04 PM