All the projects of Snehalaya working on the issues related with HIV-AIDS have today organized several programmes in and outside the campus, on World AIDS Day today.

Snehalaya’s SPRUHA center is India’s first, sixteen years old care and support center for HIV-AIDS positives. The center has given treatment and residential care to 2500 patients in the last year. The center is extending its services on total free basis. The center has organized ‘Anand Melawa’ of all the HIV-Positives Center presented many success stories of the survivors to inspire the depressed patients and their families. The Karnataka Health Promotion Trust and NACO are the partners of Snehalaya in SPRUHA activities. 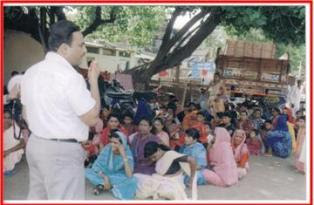 Snehjyot Mukta Project mainly deals with the women, men and eunuchs in prostitution. The project has today re -launched the female condoms as a second step in the mission of prevention of HIV-AIDS. The women volunteers of Snehalaya in the red-light areas selling the female condom on 3 Rs.50 Ps. Per piece cost. A woman volunteer who teaches the use of female condom receives Rs.1.50ps. commission on sale of each condom. Today the 500 female condoms were purchased in the 3 red-light areas of Ahmednagar. The general health camp was also organized in the red-light areas of Ahmednagar, Shirampur, Shevgaon and all the Tamasha Theaters. In the district. Pathfinder organization is extending support to Snehalaya in this mission. Snehalaya has also organized similar programmes at Malegaon (Dist. Nashik) and Pune in the red-light areas and in the institutions where positives received opportunities of new life.
Snehalaya’s Balbhavan Project is active in 6 major slums in Ahmednagar city. Rallies, Exhibitions, health camps were organized to create awareness about of the HIV-AIDS in all the slums. 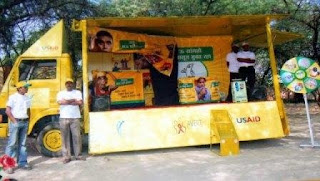 In Snehalaya’s rehabilitation center, Cummins Generator Technologies has organized a fun fair for HIV-Positive children, women and patients.  The children have participated in all the games and cultural programme on the occasion. The local media has also given publicity to various success stories of survivors of Snehalaya family.
Posted by Snehalaya at 12:38 PM