"If we want to make India a great nation, then we have to prepare ourselves for a great sacrifice. Stop mere admiration and start practising the values of those who were fearless in death while protecting the country" said Mr.K.Unnikrishnan, father of late Major Sandeep Unnikrishnan who died while fighting with terrorists on 26th Nov.2008 in Mumbai.

31 years old Sandeep was the only son of Mrs.Dhanalaxmi and Mr.K.Unnikrishnan. The parents  organized a bicycle rally "Tribute to Real National Heros" starting from India Gate, New Delhi on 26th Oct. to reach Gate way of india, Mumbai on 26th November.

During the rally, they were  interacting with the youth inspiring them with the work and philosophy of armed forces. Snehalaya family gave a warm welcome to them and honored with a Scroll of Honor in presence of imminent citizens of the city. They 500+ audience included district police chief Krishna Prakash, Satish Kane Editor of Daily Samachar, several freedom fighters, NGOs and the media.


Mr.Unnikrishnan shared the childhood days of late Sandeep.Youth volunteers of Snehalaya accompanied them on bicycles till the boundries of Ahmednagar.
Posted by Snehalaya at 3:29 AM 1 comment:

Shoba Narayan writes in her recent article in Live Mint
" When you donate to your favorite charity, don’t do so anonymously. Put down your name and a number. Tell the world, not because you want to brag but because it will spur others to give "

She goes on to say:
... Putting your name and a number beside a charity’s name instantly gives it credibility and subliminally increases the amount of other donor cheques. It will cause others to say, “Oh, Ramya gave a lakh to Vanchit Vikas. Maybe I should give at least Rs. 10,000 instead of Rs. 5,000, especially since I am from Pune.”
On the flip side, charitable organizations should persuade donors to allow them to put down names and amounts. Rather than releasing a bald list of donor names without any accompanying amount, the NGO donor list should look like this: “Mrs Kesliwal: Rs. 1 lakh; Ms Archana: Rs. 2,000; Mr R. Jhunjhunwala: Rs. 10 crore; Mr Anand: Rs. 700.” Anonymous donations have less of an impact because when people are considering a charity, they want to know who else gave, and how much".


This is what she had to tell about Snehalaya
" Snehalaya, goes where angels fear to tread and confronts the basest of human instincts pretty much on a daily basis. It comforts children whose innocence has been destroyed, and works to rehabilitate prostitutes with compassion"


In the article, Shoba whole heartedly praises the efforts of volunteers and social workers who dared to take on the child sex offenders and fight the legal battle to get them to conviction.
"2,500 other fearless people, including social activist Anna Hazare, and local women’s activists groups, marched with Snehalaya to bring these criminals to book. She writes that  child sex offenders are the lowest of the low"

Posted by Snehalaya at 11:48 PM No comments: 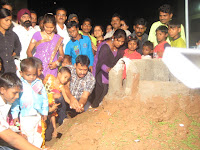 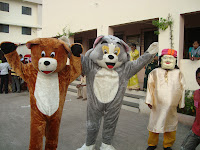 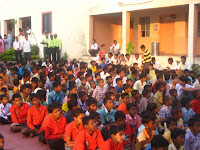 1300 children from various orphanages, slums, red light areas and of special need have enjoyed DIWALI together in Snehalaya. Lions Club sponsored this unique event.  Mr. Krishna Prakash, District Police chief has spend about 3 hours, danced with kids and inspired them to decide the goal of life.
Posted by Snehalaya at 8:59 PM 1 comment: 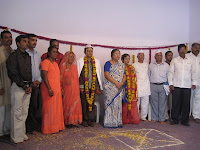 Wedding of Rekha and Manoharlal Dadi was celebrated yesterday in snehalaya.Rekha is born ,brought up in snehalaya .she took the education of home science and tailering.Manoharlal is a graduate and working in a jwellery manufacturing unit as a marketing head.This was the     77 th marriage arranged in snehalaya. who le Dadi family,our past and present students,our married daughters and their families were present at the occassion.But fortunately Dr.Bharti Vikas Amte has graced and blessed the ceremony by singing marriage songs and a song written by Baba Amte. Those ,who are interested in marriage with the daughters of snehalaya , can contact to our marriage counsellor on 91-9011020176.
Posted by Snehalaya at 8:52 PM No comments: 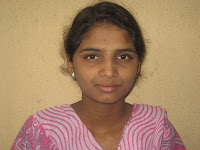 We are very happy to inform you that today Ms. Shraddha Sathe, the inmate of Snehalaya has successfully undergone the major surgery in KEM Hospital, Mumbai.  She was suffering from Budd Chirai Syndrome from last two months. She was admitted in KEM on 20th, October 2010 (referred by Dr. Abhijit Pathak after one month treatment in Swasthya Hospital).   There was severe pain in her abdomen; hence she could not even sit properly.
The team of doctors including Dr. Kranti Kumar Rathod, Dr. Hemant Deshmukh,         Dr. Prithvi and Dr. Ishan was engaged in the surgery for more than two hours between 5.00 pm to 7.30 pm.  Now she has been shifted in ICU (Intensive Care Unit) for next 24 hrs.  doctors says that she is out of danger now and she will improve within next 24 hrs. Then she can be shifted to general ward. 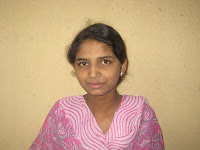 Shradha’s operation was planned two days back on 27th, October 2010.  She was in Operation Theater for whole day with all the necessary preparations, doctors were ready wearing the clothes (Costumes) for operative. But the operation was canceled only because of unavailability of Anesthetists.  Snehalaya’s social worker Mr. Kundan Pathare met and complained to the higher authority Dr. Sanjay Oak(the Dean) and Dr. Pravin Balgal (Sr. Administrator)  of the hospital and requested to order the concerned Medical Officers for immediate operation.  Then the whole system moved and the concerned authority gave priority for Shradha’s operation, otherwise they had given the date 26th, November 2010 for operation and it might be the high risk for her survival.  Now she is well and her post operative treatment has been started.
The well wishers and donors have given good response to the appeal of Snehalaya to save Shraddha’s life.  Snehalaya is heartily grateful to all the donors and supporters for their kind and timely support.
Posted by Snehalaya at 8:49 PM No comments: