Landmark achievement of Snehalaya. Two life terms for 20 accused in the case of trafficking & sexual exploitation of a child

Ahmednagar 25 September 2010
This is the greatest legal achievement of Snehalaya.  After a 4 year legal battle, Snehalaya succeeds in getting conviction of 20 high profile individuals who were exposed in a brutal case of gang rape, trafficking and commercial sexual exploitation. In a landmark judgement all the 20 accused were sentenced to  double life term  imprisonment and additional fine to cover rehabilitation of the victim. 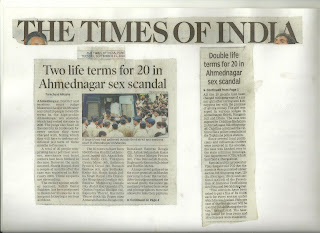 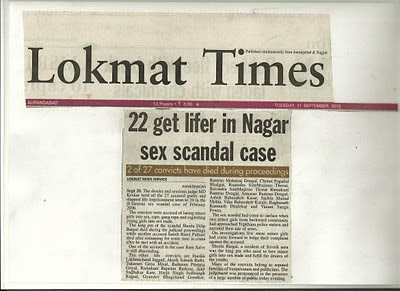 Snehalaya has successfully rehabilitated the victims and the families.   The accused and the traffickers were offering a house for accommodations free of cost with ration to the families.  But it was the attempt to hostile the victims before recording their witness.  Snehalaya family offered security, affection, home, opportunities of jobs and education not only to victims but to all their family members.  Though  Snehalaya empowered the whole families, the father one of the victim hostiled in greed of money.  First he tried to get a possession of a victim girl to hostile her in favor of accused. He has demanded the possession of the girl to Child Welfare Committee.  After denial by CWC, he appealed in District Court.  There at CWC, Snehalaya has successfully opposed the claim of possession.  Then father conspired with 3 lawyers of accused, 4 accused in C.R. No. 50. Together they took the help of one criminal gang in Mumbai and kidnapped a victim from Saint Catherin’s Home, Mumbai.  They brought a victim to Ahmednagar, contacted every accused and collected the huge amount of money to hostile the victim in the court. The girl was forced to registered her witness as if the volunteers of Snehalaya and Child Line have raped her and forced her to take the names of reputed, wealthy people from the society.  But the girl was honestly gave her  the statement in the J.M.F.C. Court and confirmed that her father is forcing her to hostile for the sake of money.  Snehalaya again played a major role to rescue the victim from the traffickers.  Then a case was registered of kidnapping in Oshiwara Police Station of Mumbai and the girl was taken in to safe custody.
When the local police did not support..
When police started playing the mischief, Snehalaya organized a long march on 8th March 2006, of civil society members of Ahmednagar to Collector Office. The march was headed by eminent social leaders like Anna Hajare, all Doctors, Professors, Chartered Accountants, Lawyers, Freedom Fighters, Journalists, Feminist Organizations, Youth and Students Organizations, like minded people from local political circles, etc.  This crowd of 2500 people gave a strong message to all anti social elements.  The investigation was transferred to CID from local police due to created pressure.  There were 38 witnesses examined in the case and mainly they include dare devil volunteers of Snehalaya and Child Line.
This conviction has threatened all the traffickers, procurers and customers of children for sexual exploitation at large extent.  Ahmednagar District is totally free today from the use of children in flesh tread. The civil society members, media, local NGOs were sensitized on the issue of commercial sexual exploitation of children and trafficking. 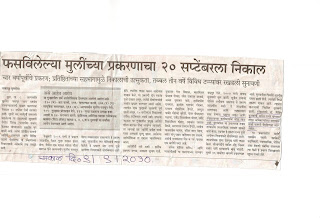 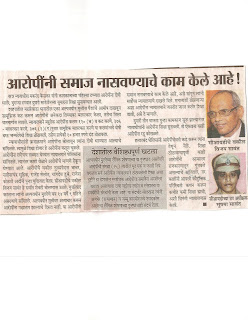 Lessons for Non Profits Organizations
1.   Sustainable constructive work is possible only if we are ready to fight.  Firm stand for constructive change creates opposition and the NGO must be ready to fight t for the change.
2.   Progressive, strong laws itself cannot create any threat to anti social elements. Government, police and court cannot do it themselves.   Conviction is possible only when the civil society members take responsbility and plays active role of complainant, witness, panch, etc.   Only then we can obtain justice and create a social change.
3.   A small group of zealous youths can even bring the bigger social change with their honest approach, unity of action with passion.
4.    We can not bring the social change on the basis of big funding, salaried staff, projects, media publicity and contacts with top bureaucrats – MLAs, MPs, Ministers.  We have to involve the common men, small donors, moral supporters in our work. These supporters may come on street or join hands against any bigwigs.  NGO should try to widen the social base to face any sort of threats or the pressures. We have more than 2500 people in support of Snehalaya.  Snehalaya could win this  war against the organized criminal groups only because of its wider social base.
5.   Networking with other NGOs helps us.  Snehalaya’s linkages with the movement of Anna Hajare, Nyayadhar (Organization of women lawyers), Organizations in water shade – education – right based movements – media networks, etc. have always helped us.  This has to be reciprocal. Most of the NGOs are in love with themselves.  Let us appreciate the work of others even if you are not directly concern with it.
6.   NGO should not think of short term fame but must keep a long term goal of social change in action.  The short term publicity harms the long term aim and object of the mission.  The spirit of combating in NGO is useful in creating the credibility in the society.  It attracts the common man towards the work.

Our Gratitude
Snehalaya is running the anti trafficking program successfully in Ahmednagar districts since 1996.  The Mukti Vahini group of Snehalaya was  working on its own, without any remuneration.  But since the year 2004, Mr. Sunil Devnani, our supporter and member of Caring Friends has given us a personal donation for running the anti trafficking mission successfully.  Because of his support, we have organized the legal support, travel and support for the rehabilitation of the victims.  Captain Ashok Tamhane has donated his Quallis jeep for anti trafficking mission five years ago.  Capt. Tamhane is also a member of Caring Friends.  Mr, Nimesh Sumati and Ramesh Kacholiya alias 'Uncle' have helped us in settling the victims and their families.  Snehalaya has registered this social change with the help of these patrons.