The Raped Fight Back!

R.A.P.E. is not only about forcible violent sex, it's actually an abbreviation for the horrific Rejoicing Act of Perverse Enjoyment. To ensure that the offenders are severely punished, and to instill fear in potential rapists of minor girls and women, the World Women’s Day celebration organized by SNEHALAYA at Gunvadi village (Ahmednagar district) was a day with a difference. Two brutally raped women (along with two witnesses in these rape cases) exhibited extraordinary courage by publicly narrating their ordeal. They recalled how, in spite of being innocent victims, they were ridiculed and humiliated in society. And yet these courageous ladies persistently struggled for justice. Their efforts finally paid off, when just last week, the perpetrators of this barbaric crime were sentenced to 20 years rigorous imprisonment. However, our “civilized” society still continues to treat these commendable women as criminals for participating in the raping! 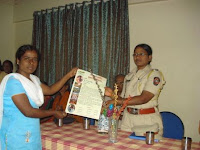 Snehalaya paid homage to these four brave women and humbly presented each of them with a citation, a trophy, a (“Maher”) saree and other gifts. The victims of this horrendous atrocity wept, and tearfully said that their tears of joy has finally washed away their grief. When they said that the honor bestowed upon them has revived their dead self-respect, the audience spontaneously rose to give them a standing ovation!

Women’s Day is celebrated in Snehalaya to honor awe-inspiring ordinary women of extraordinary courage, who demonstrate bravery to triumph over overwhelming odds. The Asst. Commisioner of Police Ms. Maya Danke who focuses on crimes against women, presided as the Chief Guest of the function. On this occasion, Ms. Renuka Dahatonde who acts as a mother to the AIDS-afflicted children living in Snehalaya, as well as two women liberated from prostitution were also honored.

The horrifying rape of Nirbhaya in Delhi and her subsequent demise was remembered and the audience took a solemn oath to relentlessly wage war against rapists and to crusade for amending our archaic Anti-Rape law. 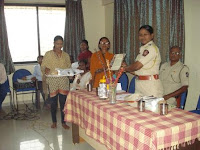