The female percentage of the population in Ahmednagar district is increased due to the consistent and coordinated  efforts of Snehalaya  and govt. agencies.  Last year's survey, since June 2011, reported the ratio of female births at 813 per 1000 males.  This year in the official  survey of April, May and June 2012, the number of female births was found increased up to 850 against 1000 boys. These statistics were officially announced  by Mr.Ashok Pawade, Dy.CEO of Ahmednagar Zillah Parishad on 11 July, 2012.

Snehankur Adoption Centre  had organized a felicitation ceremony on today at Snehankur Centre. The NGO has respectfully invited  those who have played the conscious roles in converting conventional efforts into an encouraging  success story.

Dr. Ravindra Niturkar (Dist. Civil Surgeon ),  Mrs. Vaishali Shinde (Dy.Police chief),  Dr.Priti Deshpande, well known social worker,  and many others were present as chief guests to celebrate this success on  the occasion. Dr.Niturkar  said that , mainly the  "Stree Bhrun Hatya Mukta Gaon Abhiyan" (People's Movement to make a village free from  female feticide) by Snehalaya -Snehankur, the strict implementation of PNDT Act, the schemes by Gram panchayats like depositing 2000 rupees in the name of  female immediately after her birth, the get-together program of pregnant women at village level, etc.  have proved as  very effective measures in changing the trend. Government agencies alone cannot face the complex social challenge of female  feticide but it needs the active involvement of NGOs and society to fight the social evil of female feticide. Snehalaya and Snehankur volunteers have reached out to grass roots with positive messages. This movement is  working 24 x 7 and also saves the underweight and premature girl children who were the victims of social customs.  "These efforts need no money but a strong will power for social change," Dr.Niturkar said. 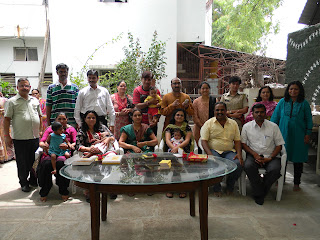 On this occasion,  4 children  were given in adoption to families by Snehankur Adoption centre .Out of these 4 kids, 3 were girl children. They are the survivors as their  lives were  saved after the  attempts of feticide. They were underweight and premature when saved by 'Team Snehankur.'  Mr. Ajay Wable concluded the function by giving a pledge to all to save the girl child & to work hard  for achieving  the goal  of an equal  male to female ratio  by the end of  2015 in Ahmednagar district. 20 volunteers  who had contributed in this mission were also honored at the occasion.

Rahata  tehsil is famous due to the international pilgrim centre of Shirdi. The female ratio in Shirdi-Rahata area is just 758 . Sangamner is the tehsil of state revenue minister Balasaheb Thorat where the percentage is  752. Shrigonde is the tehsil represented by  Dist. Guardian Minister Mr.Babanrao  Pachpute of NCP.  Here  the percentage is  804. In shevgaon-820, Rahuri-814, Karjat-922, Jamkhed-903, Pathardi-909, Jamkhed-903, Shrirampur-912.

Akole is the tribal, socially-economically-educationally  backward  tehsil of Ahmednagar district. Here the female ratio is 952, found much better than other well-off tehsils.

"Snehankur has decided to concentrate more  on Shrigonde, Rahata, Rahuri, Sangamner and Shevgaon tehsils in the next 2 years," informed Kundan Pathare,  Asst.coordinator of Snehankur Adoption Center.  He urges every citizen to step forward  to stop female feticide &  help in empowering the girl child in every possible way.  "The action must begin at home, in our families, in our communities," he added.
Posted by Snehalaya at 9:22 AM