Anamprem is a sister concern organisation of the Snehalaya Family. Pune-based renowned 'Indira Group of Institutions' has selected Anamprem for its prestigious "Uth Kranti National Award." This  award ceremony will be held on 3rd Nov. 2012 at Balgandharva Rangmandir in Pune. Anamprem will receive  this award at the hands of Ramon Magsaysay  Awardee  Miss Nilima Mishra. Anamprem is recognised for the efforts taken for the physically challenged and blind, deaf and dumb students.
The award committee in its letter said that "This award is given to the Youths / Organisations who are driving social change in India. Anamprem is matching penfectly  to this expected action."

The award  includes an amount of Rs.1.25 lacs and a citation. But more important is the opportunity to present the work in front of a passionate group of youths.

Snehalaya - Anamprem family has unanimously decided and proposed the name of Mr. Ajit B. Kulkarni  to receive this  award on behalf of 'Anamprem.'

This  dedicated NGO has been working in tough circumstances since the last 8 years..
On this occasion, we would like to introduce briefly the work of Anamprem and the team behind these dedicated efforts.

Snehalaya had initially started working with the issues of prostitutes and their offspring and later on with HIV positives, slum children, etc. After a decade, ‘Team Snehalaya’ realized that the basic work is needed in many more segments of child care. The issues of children of special needs were grave. Neither the Govt. nor any NGO is taking notice and responsibility of these circumstances, Thus, Snehalaya had decided to start a separate NGO. The name was unanimously decided as "Anamprem." It started working in the year 2004, was formally registered and established in the year 2005. Snehalaya family has given the  sole responsibility of Anamprem to its two  dedicated soldiers. They are   Ambadas Chavan  and Anil Gawde. These 2 young volunteers have  established the work from the foundation. Ambadas and Anil identified Mrs. Anita & Mr. Ajit Mane and Mr. Ajit Kulkarni as their successors and groomed them to shoulder the institution. 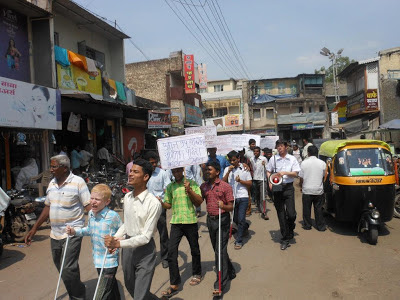 Ajit Mane is a well-known architect. Mrs. Anita is a housewife. Ajit Kulkarni is a teacher in a private school in Ahmednagar. This new team is shaping Anamprem with passion.

Since Ajit is going to receive this award, here is a brief note about the journey of Ajit Kulkarni and present activities of Anamprem.

Ajit has grown up in the rural parts. He has a passion for literature. He was also dreaming about social work. After reading many  books about Baba Amte he went to meet Baba. Inspired by Amte's work, Ajit decided to dedicate his life to social work - a decision that has today brought succour to many poor, destitute, deprived and differently-abled children.

These deprived children have managed to stand on their own feet without having to beg for help from others, thanks to "Anam Prem" .
Ajit originally hails from Madha taluka in Solapur district. Right from his childhood, Ajit developed a propensity to contribute to the family income by carrying out odd jobs that came his way. Under such circumstances, Ajit paid a visit to the Somnath project initiated by Amte. Ajit was overwhelmed by the work of the social worker and the visit transformed his own life.

Thereafter, Ajit came into contact with Anant Zende who shared his feelings. Ajit met Snehalaya Family  who was associated with Amte's "Ananadvan." Dr. Girish  Kulkarni advised Ajit to complete his education before launching into social work wholeheartedly. Ajit completed his D.Ed and then joined "Snehalaya", an organization that had been started by Kulkarni in Ahmednagar. Ajit has been attracted more towards the work of Anamprem. 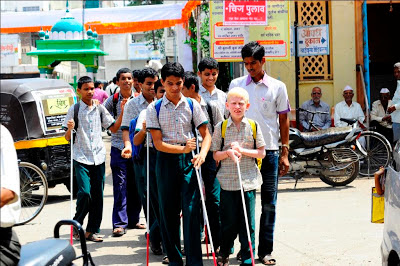 Snehalaya family had also launched "Anam Prem" but the latter organization was facing a state of neglect owing to a paucity of funds and manpower. The task of even providing meals to the children under the organization's care had become difficult. Ambadas & Anil gave direction, inspiration and guidance to Ajit. Ajit found out the places from where he could obtain food at low cost.
At that time, Ajit was working in a school as a teacher. He would dedicate himself to social work after the school ended for the day in the afternoon. Starting with just two children, the number of children under Anam Prem's care rose to 35 within three years. Anam Prem charges a fee of Rs. 200 per month from the inmates and in lieu of this it provides food, education and residence.

Among other things, Anam Prem has Himmat Bhavan - which lodges the poor and differently-abled children, runs the Anand Computer Training Centre, has a library of braille books for the benefit of the blind children, and also manages an orchestra that is comprised of differently-abled artistes.
This award will surely boost the morale of the Anamprem team.

On declaration of this award Mr. Ajit Mane & Mr. Ajit Kulkarni said, “It’s encouraging. But we have miles to reach the destination.”