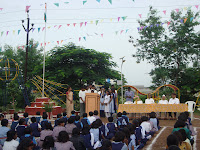 Freedom Fighter Mr. Ramchandra Patwardhan went to jail along with Mr. Vijayendra Kabra during their freedom struggle. Mr Patwardhan was imprisoned by British Govt. in 1942. He is now 85 Yrs. old but has all the enthusiasm of his fiery youth. Mr. Patwardhan was present for the flag hosting programme at Snehalaya. 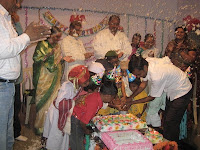 Mr. Sanjay Bandishti (Industrialist), Mr. Suwalal Shingvi (President) also participated in the programme. They  addressed the students and talked about sacrifice of several freedom fighters like Bal Gangadhar Tilak, Mahatma Gandhi, Bhagtsingh, Netaji Subhashchandra Bose, etc. Mr. Ramchandra Patwardhan shared his experience in the freedom movement and the stories of several freedom fighters who has sacrificed their lives  for the nation, but were never made it to the history books. He expressed sorrow for the serious problems of corruption, violence and selfish motives of our leaders in our country, today


In the evening a common birthday of Snehalaya children was celebrated. Many eminent  personalities were present for the programme. They wished good health and long lives for the  our children.
Posted by Snehalaya at 10:54 PM